Basically converting some free-form .rst (as in ReST or reStructuredText) like this: 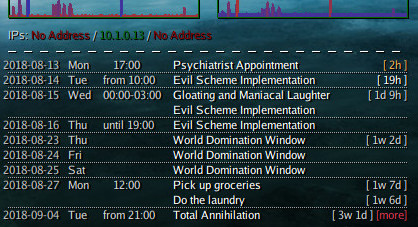 Though usually with a bit less theatrical evil and more useful events you don't want to use precious head-space to always keep track of.

Emacs org-mode is the most praised and common solution for this (well, in non-web/gui/mobile world, that is), but never bothered to learn its special syntax, and don't really want such basic thing to be emacs/elisp-specific (like, run emacs to parse/generate stuff!).

rst, on the other hand, is an old friend (ever since I found markdown to be too limiting and not blocky enough), supports embedding structured data in there (really like how github highlights it btw - check out cal.rst example here), and super-easy to work with in anything, not just emacs, and can be parsed by a whole bunch of stuff.

Should be zero-setup, light on dependencies and very easy to use.

Has simple iCalendar export for anything else, but with conky in particular, its generated snippet can be included via $(catp /path/to/output} directive, and be configured wrt columns/offsets/colors/etc both on script-level via -o/--conky-params option and per-event via :conky: <opts> rst tags.

Calendar like that is not only useful if you wear suits, but also to check on all these cool once-per-X podcasts, mark future releases of some interesting games or movies, track all the monthly bills and chores that are easy to forget about.

And it feels great to not be afraid to forget or miss all this stuff anymore.
In fact, having an excuse to structure and write it down helps a ton already.

But beyond that, feel like using transient and passing reminders can be just as good for tracking updates on some RSS feeds or URLs, so that you can notice update and check it out if you want to, maybe even mark as a todo-entry somewhere, but it won't hang over the head by default (and forever) in an inbox, feed reader or a large un-*something* number in bold someplace else.

So plan to add url-grepping and rss-checking as well, and have updates on arbitrary pages or feeds create calendar events there, which should at least be useful for aforementioned media periodics.

In fact, rst-configurable feed-checker (not "reader"!) might be a much better idea even for text-based content than some crappy web-based django mostrosity like the one I used before.