Didn't know mpv could do that until dropping into raw mpv for music playback yesterday, while adding its json api support into emms (emacs music player).

One option in mpv that I found essential over time - especially as playback from network sources via youtube-dl (youtube, twitch and such) became more common - is --force-window=immediate (via config), so that you can just run "mpv URL" in whatever console and don't have to wait until video buffers enough for mpv window to pop-up.

This saves a few-to-dozen seconds of annoyance as otherwise you can't do anything during ytdl init and buffering phase is done, as that's when window will pop-up randomly and interrupt whatever you're doing, plus maybe get affected by stuff being typed at the moment (and close, skip, seek or get all messed-up otherwise).

It's easy to disable this unnecessary window for audio-only files via lua, but other option that came to mind when looking at that black square is to send it to aux display with some nice visualization running.

Which is not really an mpv feature, but one of the many things that ffmpeg can render with its filters, enabled via --lavfi-complex audio/video filtering option.

As ffmpeg is designed to allow many complex multi-layered processing pipelines, extending on that simple example can produce really fancy stuff, like any blend of images, text and procedurally-generated video streams.

Some nice examples of those can be found at ffmpeg wiki FancyFilteringExamples page.

It's much easier to build, control and tweak that stuff from lua though, e.g. to only enable such vis if there is a blank forced window without a video stream, and to split those long pipelines into more sensible chunks of parameters, for example:

Much easier than writing something like this down into one line.

("lavfi_filter_string" there concatenates all passed options with comma/colon separators, as per ffmpeg syntax)

Complete lua script that I ended-up writing for this: fg.lavfi-audio-vis.lua

With some grand space-ambient electronic score, showcqt waterfall can move in super-trippy ways, very much representative of the glacial underlying audio rythms: 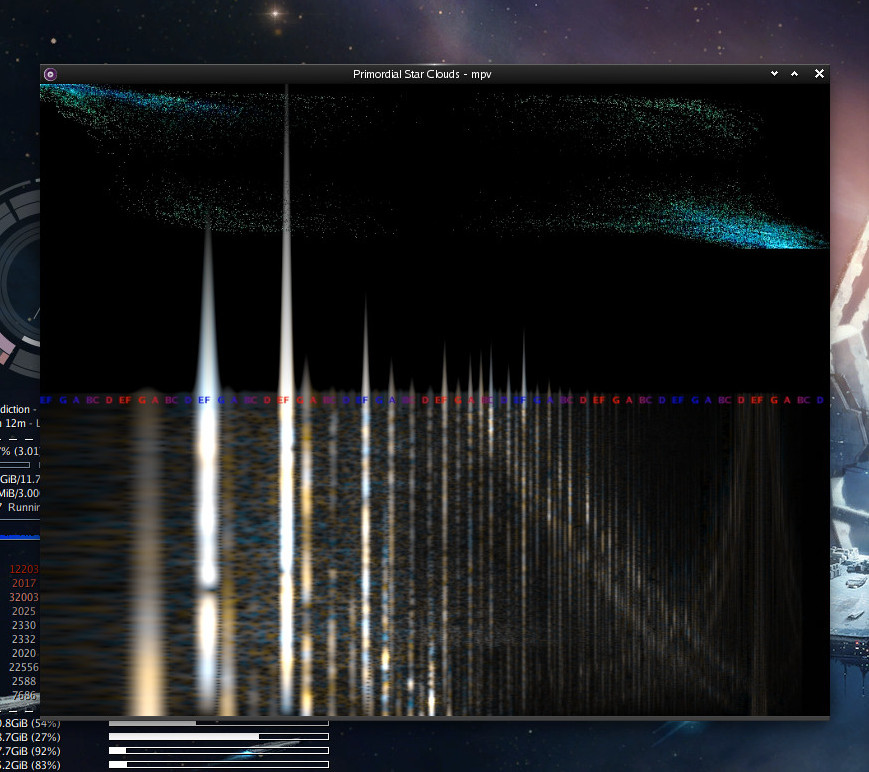 Script won't kick-in with --vo=null, --force-window not enabled, or if "vo-configured" won't be set by mpv for whatever other reason (e.g. some video output error), otherwise will be there with more pretty colors to brighten your day :)