Skype is a necessary evil for me, but just for text messages, and it's quite annoying that its closed nature makes it hard to integrate it into existing IM/chat infrastructure (for which I use ERC + ZNC + bitlbee + ejabberd).

So, finally got around to pushing the thing off my laptop machine.

Despite being quite a black-box product, skype has a surprisingly useful API, allowing to do pretty much everything desktop client allows to, which is accessible via several means, one of them being dbus. Wish that API was accessible on one of their servers, but no such luck, I guess. Third-party proxies are actually available, but I don't think +1 point of trust/failure is necessary here.

Since they stopped providing amd64 binaries (and still no word of sources, of course) and all the local non-laptop machines around are amd64, additional quirk is either enabling multibuild and pulling it everything up to and including Qt and WebKit to the poor headless server or just put what skype needs there built on 32-bit machine.

Not too enthusiastic about building lots of desktop crap on atom-based mini-ITX server, decided to go with the latter option, and dependency libs turn out to be fairly lean:

Naturally, 50M is not an issue for a reasonably modern amounts of RAM.

But, of course, skype runs on X server, so Xvfb (cousing of X, drawing to memory instead of some GPU hardware):

Concrete example above is for source-based exherbo, I think binary distros like debian might package Xvfb binary separately from X (in some "xvfb" package). fluxbox is there to have easy time interacting with skype-created windows.

Note - no heavy DE stuff is needed here, and as I was installing it on a machine hosting cairo-based graphite web frontend, barely any packages are actually needed here, aside from a bunch of X protocol headers and the things specified.

So, to run Xvfb with VNC I've found a bunch of simple shell scripts, which were guaranteed to not provide a lot of things a normal desktop session does, miss stray pids, create multiple instances for all the things involved, loose output, no xdg session, etc.

In general (and incomplete) case, something like this should be done:

So, to not reinvent the same square wheel, decided to go with trusty systemd --user, as it's used as a system init anyway.

Aside from a few quirks like hardcoding dbus socket, that already fixes a lot of XDG_* related env-stuff, proper start/stop cleanup (no process escapes from that cgroup), monitoring (state transitions for services are echoed on irc to me), logging (all output will end up in queryable journal and syslog) and such, so highly recommend not going the "simple" bash-way here.

And with systemct start skype-desktop, nice (but depressingly empty) fluxbox desktop is now accessible over ssh+vnc (don't trust vnc enough to run it on non-localhost, plus should be rarely needed anyway):

Getting skype to run on the target host was a bit more difficult than I've expected though - local x86 machine has -march=native in CFLAGS and core-i3 cpu, so just copying binaries/libs resulted in a predictable:

Fortunately, there're always generic-arch binary distros, so had to spin up a qemu with ubuntu livecd iso, install skype there and run the same collect-all-the-deps script.

Basically, what's needed for skype to run is it's own data/media files ("/opt/skype", "/usr/share/skype"), binary ("/usr/lib/skype", "/opt/skype/skype") and all the so's it's linked against.

There's no need to put them all in "/usr/lib" or such, aside from "ld-linux.so.2", path to which ("/lib/ld-linux.so.2") is hard-compiled into skype binary (and is honored by linker).
Should be possible to change it there, but iirc skype checked it's binary checksum as well, so might be a bit more complicated than just "sed".
LD_LIBRARY_PATH=. ./skype --resources=. is the recipie for dealing with the rest. 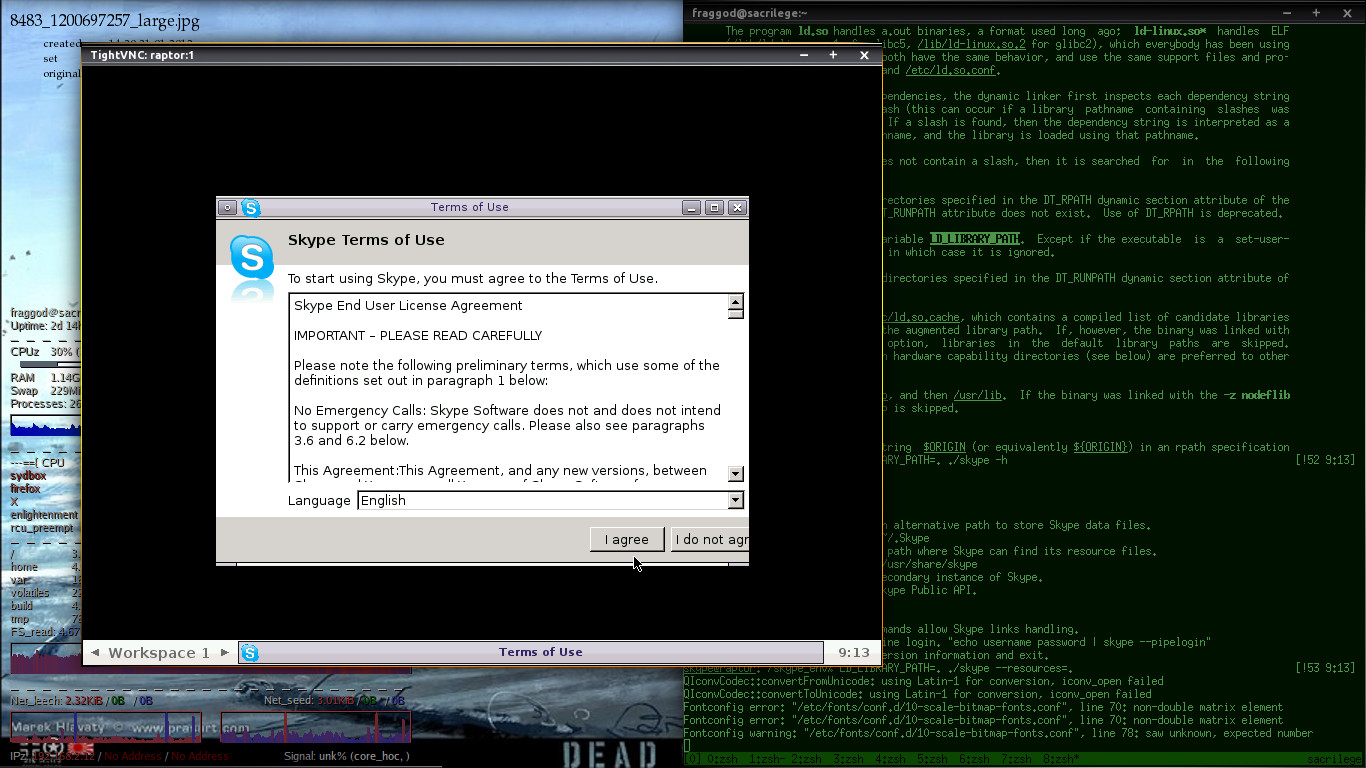 So, to the API-to-IRC scripts then... probably in the next entry, as I get to these myself. Also following might be revised apparmor profile for such setup and maybe a script to isolate the whole thing even further into namespaces (which is interesting thing to try, but not sure how it might be useful yet with LSM already in place).

All the interesting stuff for the whole endeavor can be found in the ad-hoc repo I've created for it: https://github.com/mk-fg/skype-space